Why is salmon so expensive?

Home » Food » Why is salmon so expensive?

If you’ve bought Salmon recently you may have noticed regular price increases which have pushed the price of this fish higher and higher, but why is salmon so expensive? And will these price increases ever stop?

So as with all things in life, the answer to this question is complicated and multi-faceted. There are lots of independent factors all combining together to push the price of salmon skywards. Below I will jump into some of the more popular reasons which have helped to make salmon an expensive fish.

In my opinion, this is the major driving force behind the increase in global salmon prices. As we are all well too aware, capitalism runs on supply and demand. The demand for Salmon has risen greatly, while the supply struggles to keep up.

There is a huge rise in demand for salmon from the Asain market, with China, in particular, seeing huge rises in demand. As the average wealth in China continues to surge more and more Chinese citizens can now afford to purchase higher and higher quality foods and products. Salmon is seen as a desirable, healthy food and as such the Chinese demand is skyrocketing.

Wild Salmon populations are being depleted, with many rivers that were once teeming with Slamon now being completely devoid of any. In fact from 1970 to 2000 Atlantic Salmon hauls fell a staggering 80%.

As you can imagine this is creating a perfect storm for price rises. Demand is exploding, thanks in large part to new Chinese buyers while at the same time supply is shrinking massively.

But why are the stocks of salmon being depleted so incredibly? Well, the simple easy answer is overfishing, we are simply catching too many Salmon leading to dwindling stocks. However, this is not the only reason populations are in decline.

According to a study published in PLOS One Chinook salmon have lost up to two-thirds of their genetic diversity over the past 7000 years. You may find yourself wondering why this matters, and what effect it could possibly have on the price of your next salmon purchase. Well, for one this points to the loss in overall populations, as the population shrinks it is inevitable that the genetic diversity will do too, so this can be seen as an indication for struggling populations.

Beyond simply showing us population decline though this also exposes some other issues with salmon populations. One major factor for this loss in diversity is that millions of fingerlings (young salmon) are released by commercial hatcheries, these fish have very little genetic diversity due to them being the result of commercial breeding programmes.

This loss of diversity could be a major problem for Salmon populations are they have to adapt to changing conditions like habitat loss and the acidification of the ocean. 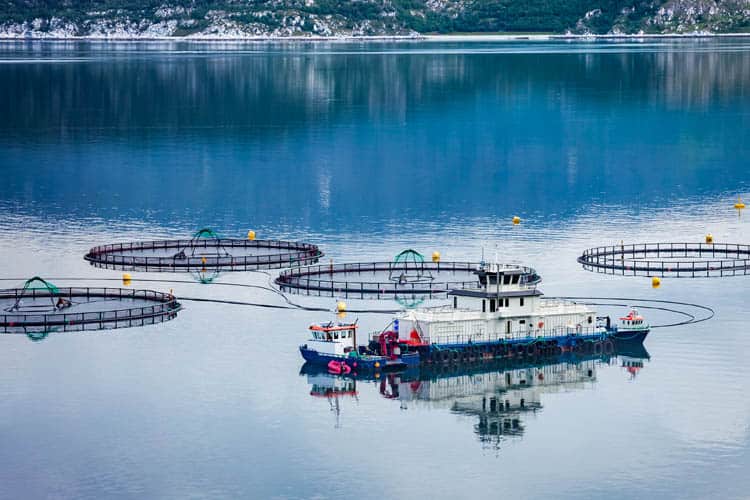 Salmon farming is big business, farmed salmon are often found in northern European countries such as Scotland and Norway as well as being found off the west coast of Canada. These fisheries often have huge numbers of Atlantic salmon being farmed at any one time.

While these farms definitely drive the price of Salmon down there is now a huge divide between farmed and wild salmon where they may as well be seen as two separate products. Thanks to strong product labelling laws in many countries the Salmon you buy will have to be labelled stating whether it was wild-caught or farmed.

Farmed Salmon has a reputation for being poor quality in comparison to its wild cousins. There are also many ethical reasons why someone may want to avoid farmed salmon. Farming of salmon has led to numerous issues, many of which are still around today. Whether it is escaped fish tweaking the overall salmon gene pool or the huge increase in parasites caused by commercial farming leaking into wild populations there are numerous problems associated with farmed salmon.

Wild salmon are much stronger fish, having to fight for their food and content with predators. These wild fish also have a much more varied diet, having to hunt for their meals.

There is a huge difference between these two marine creatures, more than just their habitation. Atlantic salmon are a lot bigger than their pacific cousins, they are also the variety you are likely to find on a fish farm. Salmon farming has one intention, to farm big fish quickly so for this among other reasons they choose Atlantic salmon. One other reason that it is often Atlantic salmon that is farmed is that many of the fish farms are in cold waters where pacific salmon just simply wouldn’t survive.

Distance from the catch

As with all fish, the distance you live from the fisherman actually catching or farming the fish can have a big impact on the price you pay. Hauling fish across countries can add significantly to the cost as the catch needs to be kept cold and shipped quickly to keep it fresh. So Salmon caught locally can often be bought directly from the fisherman, cutting out many middlemen and processing and keeping the cost down.

This article is part of our economics of food series, check out our other articles such as why are nuts so expensive?

Hey, I'm Dan, I studied computer science with artificial intelligence at Loughborough University. I try to bring my tech knowledge to the posts where it is needed while also offering a DIY view to go with Sam's professional view on tools. I am a very keen DIY'er and have experience of doing everything the completely wrong way.