In my opinion, it is not expensive, and that is where this entire argument falls down for me. Sure, DeWALT has some very expensive tools, but they also offer some very decently priced tools too.

You have to remember that DeWALT is a premium brand and offer high-quality tools. These will always come at a premium, and when you compare DeWALT to other similar brands such as Makita, Milwaukee and Metabo (all the m’s!) they are probably the cheapest.

DeWALT has one of the widest range of power tools I think I have seen, even within the same category. You can buy a DeWALT drill, complete with a battery and charger for around £100. You can also buy a DeWALT drill on its own for £400-£500.

They just sell different tools for different users and obviously, these come with their own price points. Maybe this is part of the confusion as someone sees a £500 DeWALT drill and doesn’t realise that they also offer models at £100? Maybe.

When it comes to power tool brands DeWALT actually sits at the cheaper end of the range for me. They offer really affordable tools, as we saw with the £100 drills.

When you take out the budget brands then DeWALT is one of the cheaper of the major brands. Milwaukee, Metabo, Hikoki are all more expensive than DeWALT and that’s before you even think about the ridiculously expensive brands like Festool.

DeWALT tools normally come in below these tools, they are often similarly priced to Makita tools if not a little bit cheaper.

Building My Own Makita Battery 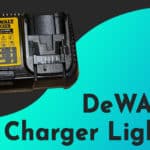 What Do The Lights on a DeWALT Charger Mean?