Everybody knows Black and Decker, they have been creating power tools for over a century, patenting the handheld electric drill with a pistol grip and trigger all the way back in 1917. For a long time now their products have been firmly targeted at the DIY consumer, and this latest drill is no different. Coming in at under £50 with a battery and charger it really is brilliant value. But how does it perform?

Well, I was lucky enough to be sent one by Stanley Black and Decker to test out and find out for myself. I would just like to say that although the drill was kindly sent to me free of charge there were no strings attached. The fact I received this drill free of charge does not affect my review at all. Everything here is my own thoughts and my own genuine review of this drill.

Everything A DIY'er Needs!

BLACK+DECKER 18V Cordless Combi Drill With Battery & Charger Find It Now
We earn a commission if you click this link and make a purchase at no additional cost to you. This helps fund the Bloke Cave and allows us to create epic projects!

So let’s get this started by stating the obvious, this is a DIY drill and as such will not be competing with your DeWALT’s, Makita’s or Milwaukee’s. But that was never its job, this drill is designed to be affordable and capable enough to perform DIY jobs around your house. When you view it in that context I think this is a fantastic drill. I was pleasantly surprised by just how much this drill could do and the quality of the battery (more on that later).

The Black and Decker Drill Features

This is a combi drill, which means it has a hammer mode for drilling into masonry as well as a regular drill mode for wood, metal, plastic etc. It is also two speed, which is changeable with a large switch on the top. This is a method used by nearly all power tool manufacturers and it works really well. The drill also has a toolless chuck, meaning you don’t need a special key to change drill or driver bits, you simply give the chuck a twist.

Then there is another dial just behind the drill chuck, this is to control the torque setting of the drill and also put it into drill and hammer mode.

The speed and clutch settings are really useful for allowing this drill to perform a multitude of different functions. Whack it into high speed for going through tough wood or metal and then put it into low speed for controlled screw driving.

The Black and Decker Battery

This is one of the strong suits of this drill and an area I was really pleasantly surprised at. I have recently become a bit of a battery nerd, you might have seen my video about Makita batteries on YouTube. So with this battery deep dive still recent in the memory, I was excited to see what batteries Black and Decker are using in these tools. There’s only one way to know, and that’s to open a battery pack up.

So after opening it up this is what you are greeted with. This is the main control board for the battery and looking at the extra connections in the middle of the pack it looks like it may have load balancing. Which if it does would be a really great feature to expand the life of these batteries.

In a regular pack like this, there is no need for connections from the mainboard to the middle battery cells. One at each end would have the battery working just fine. This is normally done so the board can monitor the voltage of all the cells rather than just the overall, this then allows for balance charging which increases the life of every cell.

So after talking about the board let’s have a look at the cells. This is a real strong point for this Black and Decker drill, as you can see in the photo above they are using Samsung 15J cells in this pack. While I don’t know too much about the 15J individually, it looks like it could be made just for Black and Decker, Samsung make some of the best 18650 cells available.

At this price point, I am really surprised they have managed to squeeze in such high-quality cells. What does this mean for you, the consumer? Well, high-quality cells will last longer and degrade at a much slower rate than cheaper cells. Meaning your battery will not quickly degrade and lose power.

The battery is an important feature on any cordless drill and for under £50 I don’t think you will be able to find a battery as good as this. This is obviously a result of the sheer size of Stanley Black and Decker and their purchase power, getting these cells from Samsung at what must be a knockdown price.

The battery is 1.5Ah and consists of 5 x 3.6v cells in parallel which adds up to a combined 18v battery pack.

This drill features as part of my best drills under £100 mega article. For this article, I put the drill through a lot of testing alongside lots of other drills including a Bosch, Ryobi, FATMAX and others too. If you want to watch the full test you can see the video below, if you just want to see the results then keep scrolling.

So below are the results from all the testing. The Black and Decker cordless drill was put through its paces in tests including drilling into concrete, brick, Oak and more.

You can see that it came in lower down the list on most occasions but bear in mind that this drill is half the price of pretty much all the drills that came above it.

There was only one task it couldn’t complete but that same test also stumped the Ryobi and Bosch drills which each cost nearly £100 so no great failure there.

Throughout the testing process, I was always pleasantly surprised at just how much this drill can do. If you are a DIY’er looking for a drill under £50 for jobs around the home then I cant recommend this drill strongly enough. If you want something a little more powerful while still keeping to a tight budget then I would have a look at the Stanley FATMAX Drill.

Everything A DIY'er Needs!

BLACK+DECKER 18V Cordless Combi Drill With Battery & Charger Find It Now
We earn a commission if you click this link and make a purchase at no additional cost to you. This helps fund the Bloke Cave and allows us to create epic projects!

Interested in power tools? We picked these articles out just for you. 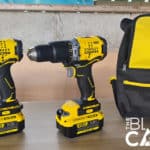 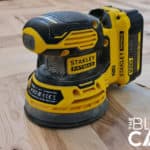