Artex ceilings were once all the rage, leaving many people buying houses complete with a funky ceiling. Now, these features aren’t quite as desirable, leading to many people wanting to get rid.

But how easy is that? Can you simply plaster over the top of Artex to hide it? Let’s have a look.

Can You Plaster Over Artex?

The simple answer is yes, you can. There are some caveats here though, and prep work is definitely required.

It is not as simple as just plastering straight over the Artex. If you do that you could end up with the ceiling just falling off one day!

Lots of people recommend scraping the Artex first in order to level off the biggest lumps.

There is one really big problem with this though, Asbestos.

Older Artex, pre-2000, used to contain Asbestos. If you think your ceiling is older than this then there is a chance it does contain asbestos.

If it does contain the big A then the last thing you want to do is to start sanding or scraping it.

If I wasn’t sure I wouldn’t take the risk and just not bother with the scraping. As long as Asbestos is not disturbed it is not an issue, so you can just seal it in with plaster.

You want to give the Artex a good clean before you do anything else. I would recommend using sugar soap and a rag and giving it a really good clean.

Sugar soap helps to degrease the Artex so is really useful for making sure everything is properly clean.

Next up you want to give the Artex a coat in something which will help the plaster stick.

Lots of tradesmen recommend using PVA. And while this does work quite well I recommend going a bit further and using blue grit. The last thing you want is your new plaster ceiling falling down. 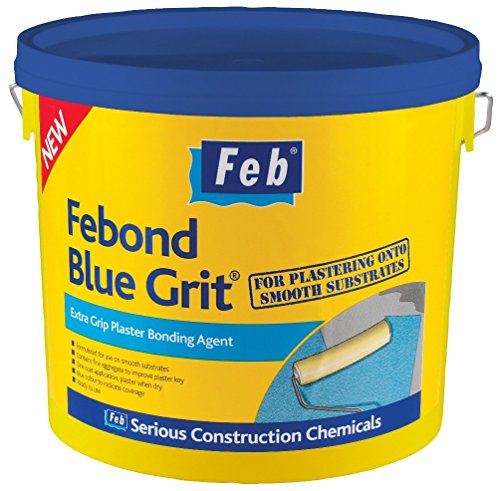 Febond Blue Grit, Extra Grip Plaster Bonding Agent, 10 Litre
£25.47 (£25.47 / kg)
Buy Now On Amazon
We earn a commission if you click this link and make a purchase at no additional cost to you. This helps fund the Bloke Cave and allows us to create epic projects!

Blue grit is a specialist product that helps plaster adhere to all kinds of surfaces. You simply paint it on.

As the name suggests Blue Grit has lots of little grit particles in it which the plaster can then stick to. It is coloured blue so you can see where you have covered.

An alternative idea will be to dryline the ceiling using plasterboard, thus eliminating the need for plaster.

This is a great idea if you are fairly sure your Artex contains asbestos as you will be completely boxing it in.

If you have a high ceiling then you could build a dropped ceiling. To do this all you need to do is create a simple stud frame suspended from the ceiling.

You then want to put up some tapered plasterboard. Tape and fill the joints and screw heads and then you are done. Ready to paint a perfectly smooth surface.

If the ceiling is already fairly level then you might be able to get away without a frame. instead screwing the plasterboard directly into the cieling.