Slot a Makita battery into a charger and you are greeted by flashing lights, and maybe a catchy jingle depending on your charger. But what do these lights mean? Let’s have a look!

What Do The Lights on a Makita Battery Charger Mean?

So you’ve just got a Makita charger or maybe your borrowing someone else’s tools. You plug the battery into the charger and are greeted with lots of flashing, or solid lights, all meaning different things. But what do they mean, well I got my charger out and showed the different lights.

A solid red light means a battery is being charged. It also tells you that the battery is currently below 80% charged.

A solid green light means the battery is fully charged.

Beyond the charging lights, there are other warning lights.

A flashing red light means the battery is overheating and should be removed.

Both lights flashing at the same time means there is a problem with the battery and it will not charge.

No lights on Makita Charger (DC18RC) 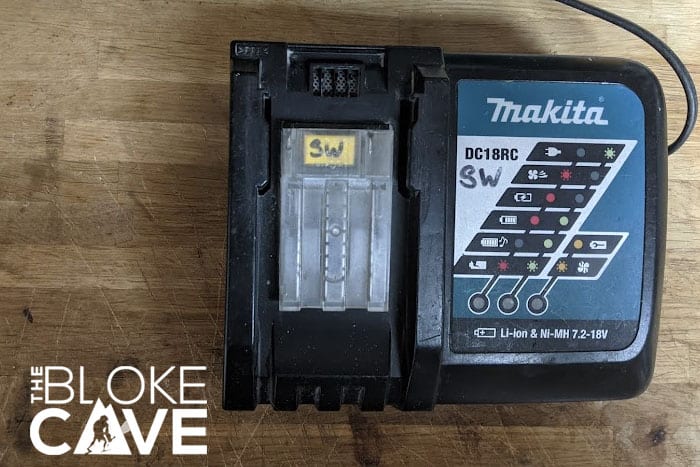 Important note: There is no power ON button on the Makita charger itself, you just have to plug it into a 240v power outlet and the green light should come on and start flashing.

The most common reasons are:

A single Flashing green light means that the charger is in stand by mode. It is connected an AC power supply and is ready to start charging your batteries. 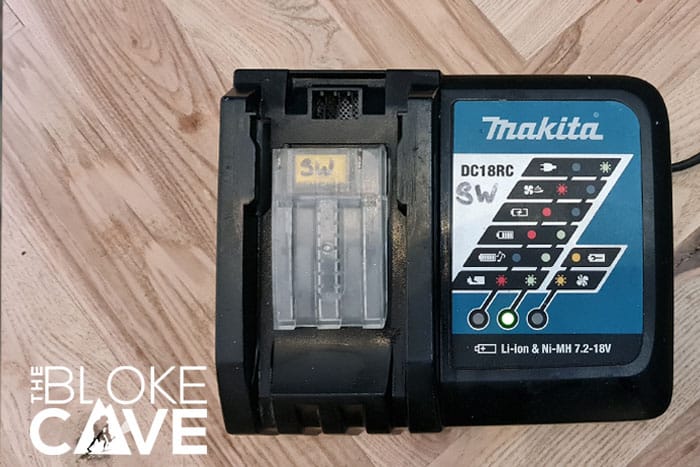 Once the battery is over 80% charged the solid red light will be accompanied by a solid green light.

Pro tip:  I like to wait till the solid green fully charged light is on, and the fan has stopped whirring. Then I can be confident the batteries have finished their charging cycle! 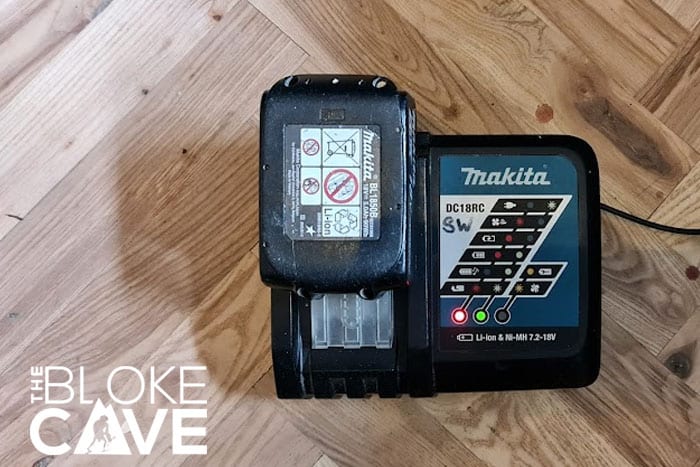 The solid green light will appear on its own when the battery has finished charging. The charging light will change from solid red to solid green and the melody sound or buzzer sound (a long beep) will come out to notify completion of charge. 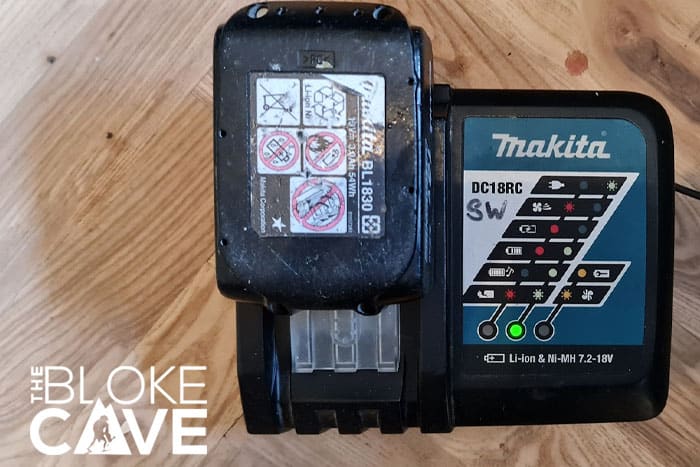 Makita Battery Charger – all lights on

If all the lights come one when you first insert the battery it could be because it is already fully charged. Try it in your tool first to see if it works!

A flashing yellow light indicates a cooling abnormality. A yellow light will start to flash if the Cooling system has come into operation. The battery will still charge in spite of the warning light, but it may take longer than usual.

The yellow light will flash for warning in the following cases.

– Trouble with the cooling fan
– Incomplete cool down of battery, such as, being clogged with dust

The charger may have detected that the battery is too hot to charge at maximum efficiency.

You may also hear the sound of cooling air coming out of the charger in order to try and lower the temperature of the battery. You can leave the battery on charge, or you can take the battery out and wait for it to cool down before putting it back on charge again.

The battery can be charged in spite of the yellow warning light. But the charging time will be longer than usual in this case. Check the sound of the cooling fan, the vent on the charger, can be sometime clogged with dust.

The Battery charger should be sent to repair or maintenance, if the yellow warning light flashes frequently. 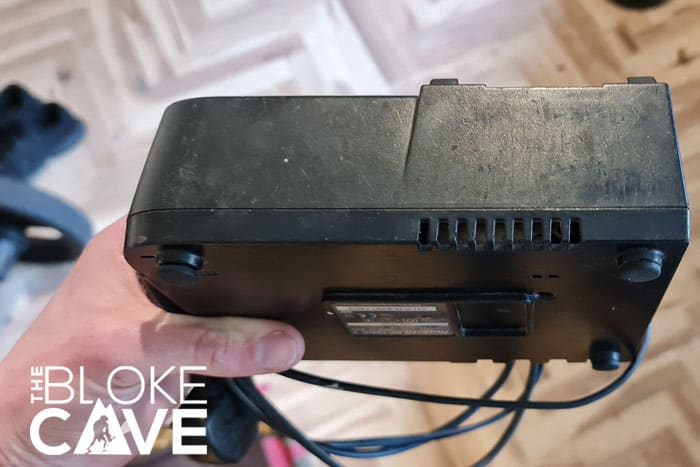 If the Yellow light does not flash, it could indicate that it is “conditionally charging” the battery. The battery can be charged in spite of the yellow warning light. But the charging time will be longer than usual in this case.

Check the sound of the cooling fan. The vent on the charger can sometimes be clogged with dust. 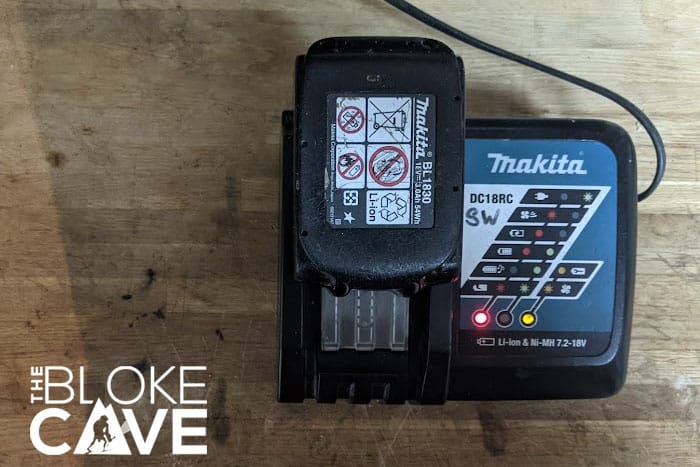 The battery charger may “conditionally charge” to prevent fast wear out. In
the following cases:

The re-charging time of such battery may be longer than usual as the battery may have continued to discharge in spite of low power.

Most Makita power tools are protected by “STAR” protection, this detects conditions that threaten to over-load, over-discharge or overheat the tool or battery. The tool will automatically cease operation, this prevents any damage to the battery. 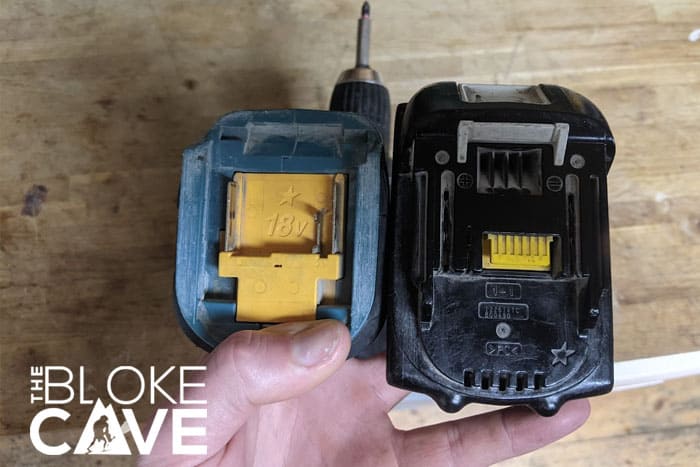 A Flashing red light on a Makita DC18RC battery charger signals a Delay in charging. This can happen if the battery is either too hot or too cold. If the battery is below or above the ideal operating temperature charging may not start.

Flashing red and green lights indicate a Defective battery. Try taking the battery out of the charger and putting it in again, a couple of times. Sometimes this can cause the battery to start charging normally. If this does not solve the problem your battery may be faulty.

Interested in power tools? We picked these articles out just for you.

My battery is making the charger flash red. This is supposed to mean it’s too hot, but it’s at room temperature and another battery stored with it is charging fine. I’m told that if the battery is faulty, then both red and green lights flash; my thought is that if a thing faulty, it’s faulty, meaning it could flash anything or nothing. My battery is clearly faulty, and because it’s faulty, it’s not telling me it’s faulty- if you see what I mean,

Yeah John I see what you mean and concur with those thoughts. It could easily mean that the temperature sensor inside has broken. If you are any good with a soldering iron it could be worth trying to replace the sensor to see if it fixes it, they are just normally placed on top of the cells and have two wires going to the main board.