So as you can see, we have both regular and delicate surface frogtapes, along with ProDec Advanced, KleenEdge Ultra, ultratape and eurocell up for testing. 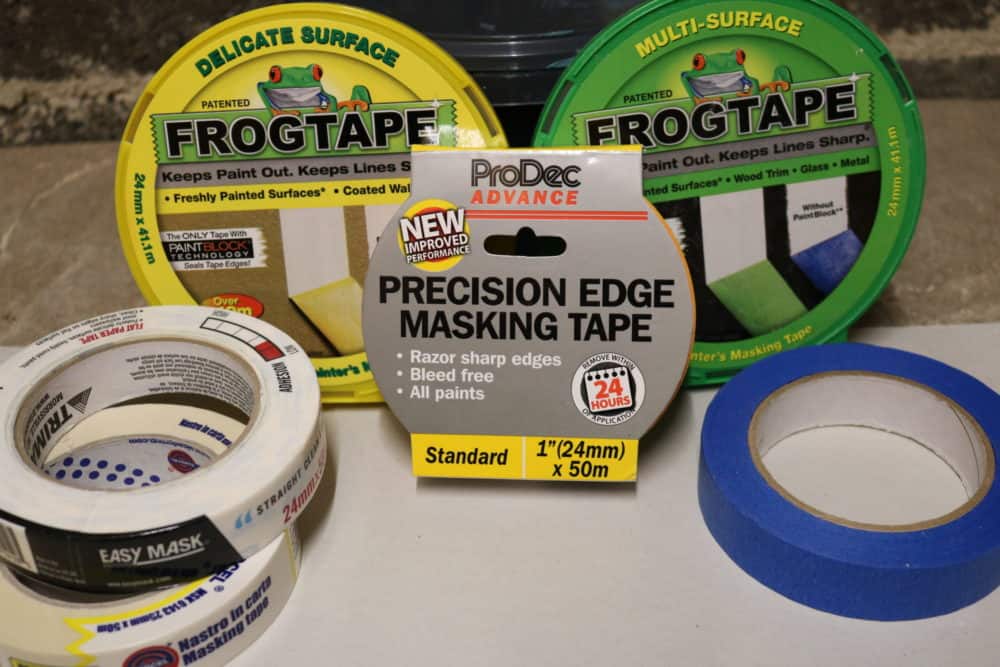 For those of you who don’t want to read through the full article and just want to know which tape to buy, I have provided both my overall winner and best budget-friendly tape below. These are affiliate links so if you click through and buy we get a small % at no cost to you. This helps fund articles like this and will allow me to do much more product testing so if you can buy through these links I really appreciate it. Thank you! 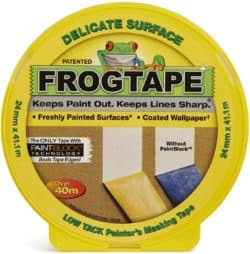 Frog tape is the only painter's masking tape treated with paint block technology. It reacts with emulsion paint and instantly gels to form a micro-barrier that seals the edges of the tape, preventing paint bleed. Delicate-surface frog tape is designed for use on freshly painted surfaces, wallpaper and newly plastered walls

Buy Now On Amazon Buy At ToolStation
We earn a commission if you click this link and make a purchase at no additional cost to you. This helps fund the Bloke Cave and allows us to create epic projects!
Best Budget Pick 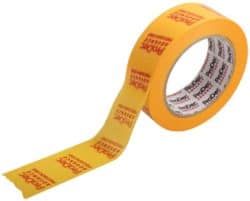 Precision edge by prodec has been specially treated to give excellent barrier properties and eliminate paint bleed for the sharpest paint lines and a professional finish every time.

Buy Now On Amazon Buy At ToolStation
We earn a commission if you click this link and make a purchase at no additional cost to you. This helps fund the Bloke Cave and allows us to create epic projects!

So let’s get some testing done. We will be putting these masking tapes through a wide range of tests to test how much paint they block, how delicate they are on the surface underneath, how they cope with rough surfaces and then finally their price points.

The first stage of our test will be using metal spray paint and a sheet of aluminium. I have used two strips of each of the tapes and made sure they are applied as evenly as possible. This is to test how well each of the masking tapes can block paint and stop if from seeping under them. 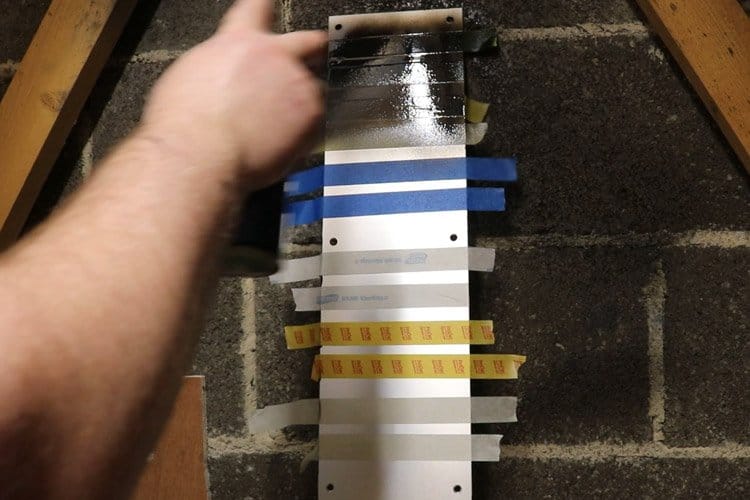 After letting the paint dry a little, it’s time for some peeling. We start with the frogtape green. As you can see, it’s done quite a good job overall, but there are some areas where the paint has leaked under the tape, so not perfect.

Next onto frogtape yellow. The first row is excellent, with barely any paint leakage, but the second is not as good. Overall though, I still think it has performed a bit better here than its green brother.

Up next is the ultratape. This is one of the cheapest tapes in the test, so I’m not expecting mega results here. And yeah, quite a bit of leakage of both strips, definitely the worst result so far.

The next tape to be put to the peel test is the kleenedge. I had never heard of this brand before, but it is quite an expensive tape, coming in at a very similar price to the two frogtapes. Two good results, the second strip is almost perfect aside from a small area in the bottom left which is more my fault than anything. I think this has edged top spot for the time being.

Now it’s prodec advanced’s time in the spotlight. As weird as this sounds, this is a really nice feeling masking tape. It just feels like a quality product. Let’s see how the test goes. Not a brilliant result on the first peel with a lot of leakage in the top left, but the second strip looks better overall. I would say this has just slightly beaten out the ultratape to be our second worst tape so far.

And finally, we have the eurocell. This is by far the cheapest tape and is in the test really to represent the basic unbranded masking tape you will find in any shop. So not holding out much hope for it, but let’s see how it gets on.

And yeah, there are paint leaks pretty much along the full run of the tape, easily the worst tested so far.

So my results so far, now obviously this is subjective, and you may have seen it slightly different than me, but this is what I have so far.

Eurocell in last with 1 point, then the ultrapaint, followed by the prodec, then frogtape green and in second we have frogtape yellow. So that means in the lead, so far is the kleenedge.

The second test – Painting with emulsion

So on the second test, we have some chipboard for a rougher surface, and we will also be testing with emulsion paint.

I make sure to put plenty of paint on and brush it in all directions giving each tape the same amount of paint and brushing to be as fair as possible.

After giving it time to dry, we are ready to peel once again. We will be following the same order, which means up first is the frogtape green. And wow! That’s an outstanding result for the frogtape, an almost perfectly straight line with just a little bit of leakage in the middle of both strips. That will be tough to beat.

Frogtape yellow does well, but the lines just don’t feel as sharp and exact as the green.

The ultratape has issues and, as you can see, is nowhere near either of the frogtapes.

Now the Kleenedge, and again nowhere near the frogtapes. The frogtapes really do shine when it comes to emulsion paints.

Next up is the prodec, and this is a solid showing. Just a little more bleed though on all the edges than the frogtapes but a good showing. A third-place so far.

Finally, the eurocell, as probably expected by anyone who has used these cheaper tapes, the result is not good. Last place overall again.

So the scores on the doors. Last place for the eurocell, followed by the ultratape. After a strong showing in this test the prodec is catching the leaders, then we have frogtape yellow and the kleenedge in second with the frogtape green out in the lead.

This test is intended to find out how delicate each tape is. If you use them on a freshly painted surface, will they peel the paint off with them?

So I have a dried but freshly painted sheet of chipboard, and I will lay two strips of each tape on. Then leave them a little while to fully stick before removing and seeing if they bring any paint with them.

So again, up first, we have frogtape green. And while not being awful, it has definitely taken some paint with it in a few different areas.

Now for frogtape yellow, and I would expect this to do really well here with it being the delicate surface version of frogtape. And yeah, a great result, a few very minor blemishes but a lot better than the green.

Up next is the ultratape. And a solid showing here. One larger mark on the second strip means for me the frogtape yellow edges it but a definite second place so far.

Now for the kleenedge. A good showing again. I think it has a few more marks than the ultratape but less than frogtape green putting it into third place so far.

Prodec ultra is next to be tested, and the first strip looks good. But the second strip is really poor. There are big patches where it strips the paint all over. Last place so far.

So the last to be tested is eurocell. And again lots of marks, maybe a little better than the prodec but its hard to say. I will give it the benefit of the doubt and put it into second last on this test.

So after the peel test, it is really tight between the top three contenders while a strong showing from the ultratape has brought it in line with prodec.

So the final marks will be awarded according to price. I have worked the price out as per 30 metres as some of the rolls are different lengths. You can see the top three are all very similar prices and are a lot more expensive than the bottom three. In fact, they are all pretty much triple the price of the eurocell.

With just pence between all three of the top tapes, I will award them all the same single point to keep it fair. I don’t think a difference of 2p per 30m means much to anyone!

So the final results and the winner is frogtape yellow, followed by frogtape green and kleenedge in a join second.

Despite finishing behind the ultratape, the prodec is my budget-friendly choice if you want a cheaper tape that still gives good clean lines.